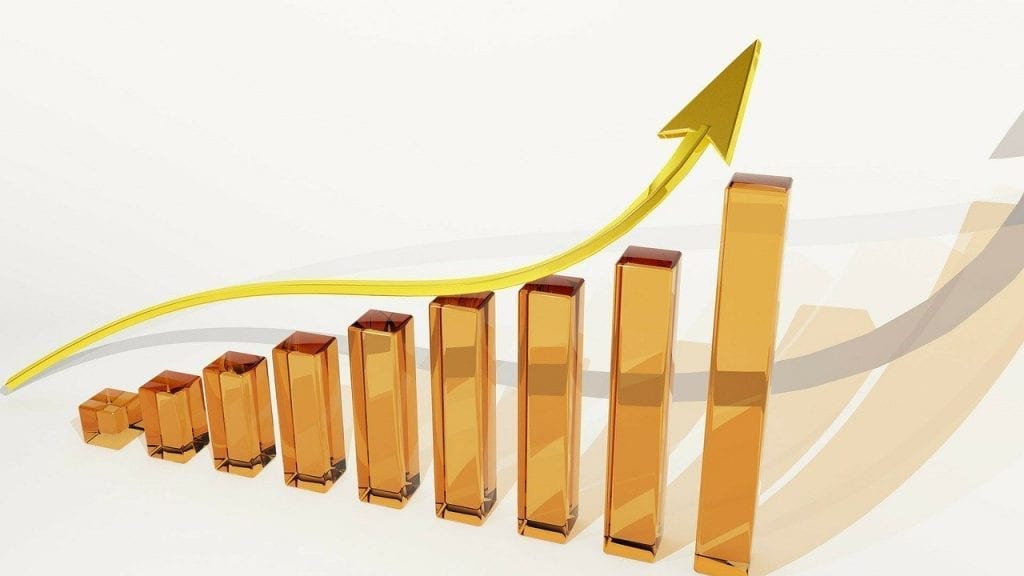 The first part of the article will focus on twenty adjectives/ adverbs that you can use to help make your description of charts more vivid. Using adjectives and adverbs to highlight increases and decreases can also be a way of demonstrating your range of vocabulary.

Below are twenty examples of the most useful adjectives and adverbs arranged in alphabetical order.

Meaning – large or noticeable
Examples: There was a considerable increase in the amount of fish consumed in the latter part of the period.
However, by 2010, the figure had fallen considerably, to 15%.

Meaning – not changing
Examples: The rate of increase remained consistent for the rest of the period, at about 5% per year.
Salt consumption fell consistently over this period.

Meaning – moving to a lower position
Examples: From mid-2008 there was a sharp downward trend in car sales.
It is likely that the rate of growth will continue to move downwards.

Meaning – very sudden or noticeable
Examples: There has been a dramatic increase in cigarette sales in developing countries.
This cost rose dramatically in 2000 when it represented 22% of the total budget.

Meaning – extremely large
Examples: In France there was an enormous increase, from 2.5-21 million euros.
Seaside holidays were enormously popular in the 1960’s, with over 85% of those surveyed making it their preferred choice.

Meaning – changing slowly over a period of time
Examples: There was a gradual improvement in results during the middle period.
The population fell gradually in the nineties.

Meaning – greater than the usual level or amount
Examples: The United Kingdom had the second-highest share at 20%.
Pollution levels rose more highly in China than Russia.

Meaning – ‘Just’ has several different meanings but the relevant one here is as a synonym for ‘a little’.
Examples: Yamhill’s population also rose from 30,000 to just under 45,000.

Meaning – very small amount or effect
Examples: The chart shows that there has only been a marginal improvement in pay rates in the last ten years.
Interest rates increased marginally for a few years but then fell again.

Meaning – a clear and noticeable difference or change
Examples: There was a marked decrease in rates of smoking for men from the 1980’s onwards.
Results differed markedly from region to region.

Meaning – too small in amount to be of importance
Examples: The difference in the amount of alcohol consumed between the two groups was negligible, just 1-2%.

Meaning – almost
Examples: The number of student applications was nearly twice as high in Asia compared to other regions.

Meaning – unusual or surprising and therefore worth mentioning
Examples: There was a remarkable recovery in attendance figures after the introduction of the new ticketing system.
There was remarkably little increase in sales despite the huge drop in price.

Meaning – about, approximately
Examples: Sales fluctuated quite widely but the overall increase for the period was roughly 40%

Meaning – suddenly, and quickly
Examples: There was a sharp rise in the number of complaints.
Temperatures fell sharply from October in the higher regions.

Meaning – noticeable and worth mentioning
Examples: There has been a significant drop in the number of students choosing Arts subjects.
The consumption of meat, while at a relatively low level, rose significantly during this period.

Meaning – small in amount or degree
Examples: There is expected to be a slight increase in the size of the elephant population in the next twenty years, but only if poaching can be more strictly controlled.
Boys seems to be slightly more interested in studying engineering but the gap is definitely closing.

Meaning – increase / decrease in a smooth, regular way, and not suddenly or unexpectedly
Examples: Orders for new ships are rising despite years of steady decline.
Interest in the new technology has been steadily increasing over the last few years.

Meaning – a rise of fall that goes very quickly from low to high or from high to low
Examples: The steep increase in taxes has led to a sharp drop in savings.
The value of the hotel has risen sharply since it was taken over.

Meaning – moving to a higher position
Examples: There has been an upward trend in sales in the last few years
The high demand for the new mobile phone is likely to push prices upwards.

The main points to be noted when using prepositions to describe increase and decreases are:

Example: Sales stood at $3,500m in 2005; Sales remained at $3,500m for five years
Explanation: at is used before a number, percentage etc when referring to a specific point. It is also used with verbs such as remain and stay when there is no change.

Example: The number of deaths linked to air pollution rose by 20 % in the 1950’s
Explanation: by is used to show the size of an increase or decrease ( How much /many)

Example: Sales remained at $3,500m for five years
Explanation: for is used before a period of time.

Example: The total value of chocolate sold in supermarkets has increased from £70 million to £ 95 million
Explanation: from… to is used to indicate the range two amounts.

Example: The chart shows a sharp increase in the popularity of skiing
Explanation: in is used before the thing which has increased or decreased.

Example: The chart shows a sharp increase of 20% in total sales
Explanation: of is used before the number, percentage, etc. showing the size of the thing which has increased or decreased.

I hope the adjectives above will be useful to you as a reference.

If you are serious about taking your IELTS writing to the next level, sign up for your FREE 3 part IELTS writing video course that takes you through both task 1 and task 2. The video lessons are led by our highly experienced UK native IELTS teacher, Katherine. We also provide you with exercises to test your understanding about adjectives!