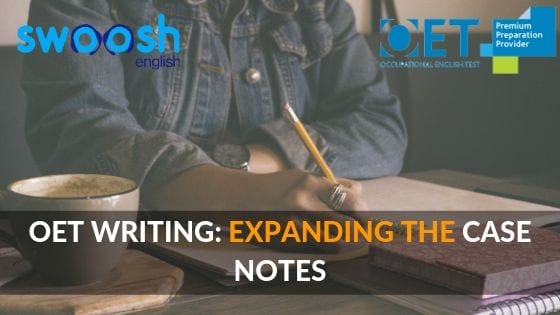 In all official OET Writing case notes, you will see these three instructions. “In your answer: expand the relevant notes into complete sentences. Do not use note form; use letter format”.
The reason for the first two instructions relates to the way the case notes are written. Often, they will be ungrammatical, for example, they hardly ever include articles such as “the” or “a”. They will often omit verbs, particularly auxiliary verbs, the verb “to be” and delexicalised verbs such as “make” and “do”. They are also often written in a list-like manner with an over-use of commas. For example “Depressive symptoms (reclusive, antisocial, irritable, agitation)”.
If you were to copy the OET writing notes into your letter as they are originally written. You would score very poorly in relation to both grammatical accuracy and language appropriacy. Sometimes, but it may not be immediately clear how to expand the information in the case notes appropriately. In this article, therefore, I will share some tips on how we can best approach this area of the task.

How To Expand Your Notes

The most obvious area where OET Writing candidates go wrong is that they do not use enough number of articles in their letters. So, in the case notes it says “6wk history progressively ↑ pain R and L knee joints”. The candidate might write: “Patient has six-week history of increasing pain in right and left knee joints”. Which communicates the information well enough. But it is not grammatical as it doesn’t include any articles.
Instead, a better sentence would be: “The patient has a six-week history of progressively increasing pain in the right and left knee joints”. In this case, I’ve used articles appropriately thus, the sentence is grammatical.
I have written another blog post on how to use articles effectively in OET Writing. But as a general rule, you need to use “a/an” for noun phrases which are countable and singular. That involves presenting new information to the reader. The “the” for noun phrases which present shared or previously expressed information to the reader. If unsure, check my other blog post and keep practicing this area of your grammar.

Earlier in this article, I presented an example of a list format that is used in the case notes. To avoid producing such lists in your letters. You need to use a range of appropriate cohesive devices.
These are words or phrases which link ideas together. In a manner which is more advanced and communicative than using a comma. You also need to add extra vocabulary to expand the notes into proper sentences.
For example, referring to our previous list again. “Depressive symptoms (reclusive, antisocial, irritable, agitation)”. We can expand on this in the following way.
“The patient has demonstrated depressive symptoms including a tendency towards reclusive and antisocial behaviour. She has also shown signs of irritability and agitation. The first thing to note here is the separated information from the notes has two sentences. This is to make it easier for the reader so that they don’t have to absorb too much information in just one sentence.
Also, I’ve used a range of linking words, such as “and” and “also”, plus a discourse marker to provide examples “including”. To show how you can better link and expand the notes, I’ve highlighted extra and paraphrased vocabulary.
Join one of our OET course packages (starting at just $49) to get high-quality practice and feedback from one of our OET UK teachers by clicking here:

I mentioned earlier that there will be instances in the notes where verb are omitted. Another aspect that may be omitted alongside that is a reference to tense. Have a look at the following example, which refers to the patient’s current social situation. “↓ADL – stopped accessing local shops and friends within walking distance”. Now, bearing in mind the fact that it refers to her current situation. Which tense should we use to report this in our letters?
What extra verbs could we add to expand these notes into a full sentence? The best tense to use would be the present perfect, as it refers to something which began in the past. But is still relevant now, so our sentence should look something like this: “The patient has reduced her activities of daily living. She has stopped accessing local shops and visiting friends who live nearby.”
From this sentence, you will also see examples of verbs that could be added to expand on the information. You access shops but it’s more natural to say that you visit friends. These details aren’t so important in the notes but they expect you to include them in your final letters.

A final point I want to look at here relates to word order. Sometimes the order in which information is presented in note form is not appropriate for more formal writing. Consider the following: “Medications: OA – Glucosamine 1500mg daily”. Now, some students will write this information in their letters using this exact format. But it’s not grammatically correct and it’s not really appropriate for a formal letter.
Much better would be to write “In reference to medication the patient takes 1500mg of Glucosamine per day for osteoarthritis”. Notice how the word order has shifted with the amount placed before the drug and the frequency placed afterwards. The actual condition is communicated at the end of the sentence. I have used this word order because it helps the reader locate the information in a cohesive and grammatically appropriate manner. It is the way a native speaker would expect to encounter the information, so let’s help them by writing it in that manner.
If you’re planning to take the OET exam, we’ve got live group classes, speaking mock exam classes, video courses and writing corrections as part of our OET packages. You can click here to learn more about OET writing notes:

Using the tips from this OET writing case article, have a look at the following notes and expand them into full sentences:

The patient suffers from facial acne, as well as acne on the upper back, shoulders and neck.
She returned complaining of vaginal candidiasis and a sore tongue. Symptoms were of four-weeks’ duration. Upon examination, we observed a Cystic acne with residual scars.
She is using a low dose of the oral contraceptive pill Diane 35.
The patient is now married and has stopped taking her OCP since January 2013.
The patient has requested a referral to an endocrinologist.
Join one of our OET course packages (starting at just $49) to get high-quality practice and feedback from one of our OET UK teachers by clicking here: